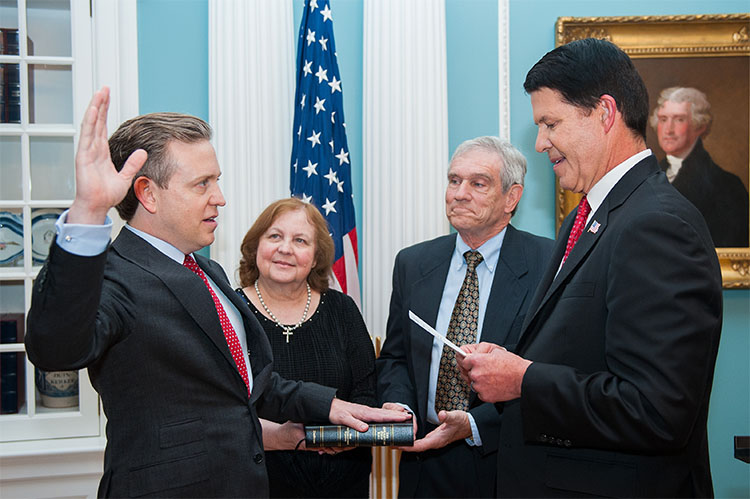 Ambassador Howery being sworn in at the Department of state by the Honorable Keith Krach, Under Secretary of State for Economic Growth, Energy, and the Environment. Present at the ceremony was the Ambassador's parents, Mr. and Mrs. Howery (State Department photo)

On Thursday, October 10, Ambassador Kenneth Howery was formally sworn as the U.S. Ambassador to the Kingdom of Sweden by the Honorable Keith Krach, Under Secretary of State for Economic Growth, Energy, and the Environment, during a ceremony in Washington, D.C.  In his remarks Ambassador Howery stated, “I look forward to working together with Sweden on the many challenges facing both of our countries and doing everything possible to ensure that our bilateral relationship remains vibrant and on track, because a strong U.S.-Sweden partnership is essential to U.S. national security interests.”

President Donald Trump nominated Mr. Howery in November 2018 and again in January 2019 to be the Ambassador Extraordinary and Plenipotentiary of the United States of America to the Kingdom of Sweden. Following a confirmation hearing on May 16, 2019, the Senate Foreign Relations Committee favorably reported Ambassador Howery’s nomination to the Senate, which confirmed him on September 17, 2019.  In his confirmation hearing, Howery stated his priorities as Ambassador would include pursuing expanded economic and trade relationships, advancing mutual security commitments, and promoting science, technology and entrepreneurship opportunities.

Ambassador Howery arrived in Sweden on October 12, 2019, and is currently awaiting an audience with H.M. King Carl XVI Gustaf to present his credentials.