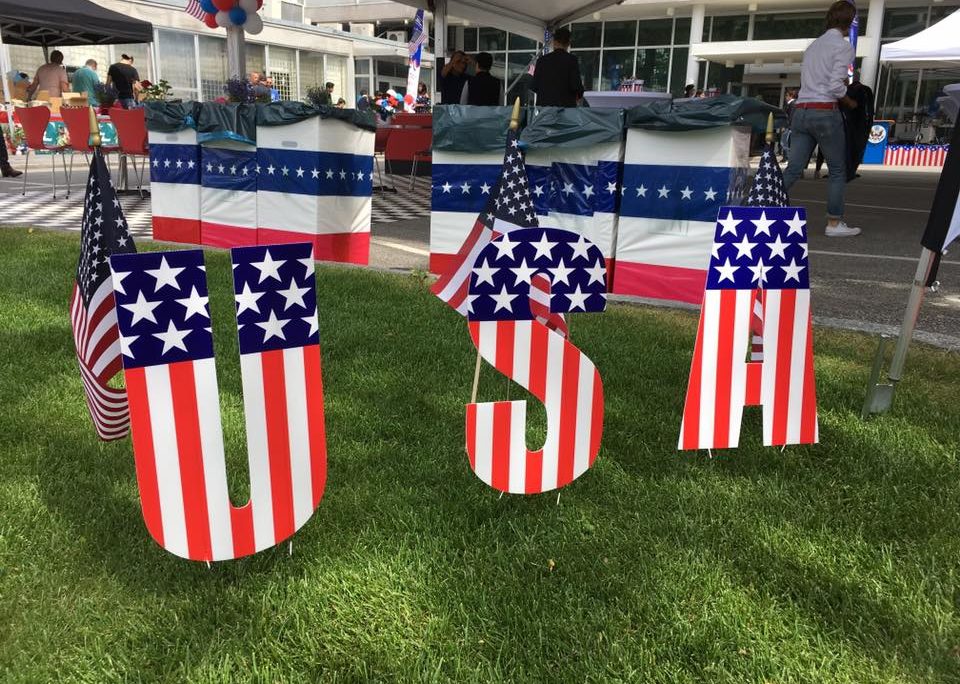 Ministers, my fellow ambassadors, distinguished guests and friends–good afternoon!  On behalf of President Trump and the American people, I would like to welcome you to this celebration of the 241st anniversary of the United States’ independence!
I want to thank all for joining us today, and I want to extend a special thanks to our sponsors whose generous assistance made this celebration possible.  Their names and logos are on the banners, and many have contributed their traditionally American products which we are enjoying today.  Could we have a round of applause for the sponsors?

I also want to than Germaine Thomas for that inspired rendition of the Star Spangled Banner.  (applause)  I’d also like to thank the Brian Kramer Band for their performance this afternoon. (applause)

On July 4, 1776, our Founding Fathers signed the Declaration of Independence, committing their lives and their sacred honor to the cause of liberty.

The new United States they created was an audacious experiment—a high-stakes test of the idea that a new country could be formed, not out of a collective ethnic or religious
identity or a common history, but out of an idea, a shared conception of liberty and responsibility.  It was a great leap into the unknown.  But as the great Swedish-American poet Carl Sandburg said, “The Republic is a dream.  Nothing happens unless first a dream.”  That American dream continues today, two hundred and forty one years after the Declaration of Independence was signed.

From the very start, the United States was a mosaic of people from all around the world, and Sweden was there almost at the beginning.  New Sweden, a Swedish settlement in what would become the United States, was established on the Delaware River in 1638.  Swedish soldiers like Curt von Stedingk and Axel von Fersen fought side by side with the American forces in the Revolutionary War.  One of the signers of the Declaration of Independence, John Morton, was descended from immigrants to New Sweden.  And when the United States finally won its independence, Sweden was one of the very first countries to recognize us.

In the centuries that followed the American Revolution, the links between the United States and Sweden increased further, as hundreds of thousands of Swedish immigrants moved to the United States to seek their fortune.

Our fellow citizens of Swedish ancestry are as American as apple pie; in fact, the first recorded reference to apple pie in the United States comes from a letter written by the Swedish pastor Israel Acrelius, who visited Delaware in 1759.

Descendants of Swedish immigrants are thoroughly integrated into the United States, in all fifty states and all walks of life.  There have been Swedish-American astronauts, entrepreneurs, politicians, Medal of Honor winners, and on and on.  Swedish-Americans are everywhere.

I should know; I’m one of them.  My own grandparents and great grandparents departed from Sweden more than 100 years ago to begin a new life on the plains of Kansas.  So I am especially proud to represent the United States here in Sweden today.

But the relationship between the United States and Sweden goes beyond family ties.  On a fundamental level, we share a vision of a safe, secure, and prosperous world.

Sweden and the United States are partners in promoting stability in Europe and beyond.  As a NATO Enhanced Opportunities Partner, Sweden already works closely with the United States and our allies to advance global security.  The Statement of Intent our two countries signed last year will ensure that our security cooperation continues to deepen.  United States and Swedish troops are working side by side in Iraq, Afghanistan and other parts of the globe.

Together, the United States and Sweden are making the world a better, safer and more prosperous place.  As Secretary Tillerson said in his National Day statement last week, we are proud to call Sweden a partner and friend.

Thank you for joining us today to celebrate American independence and the strong bonds of friendship that bind the United States and Sweden.