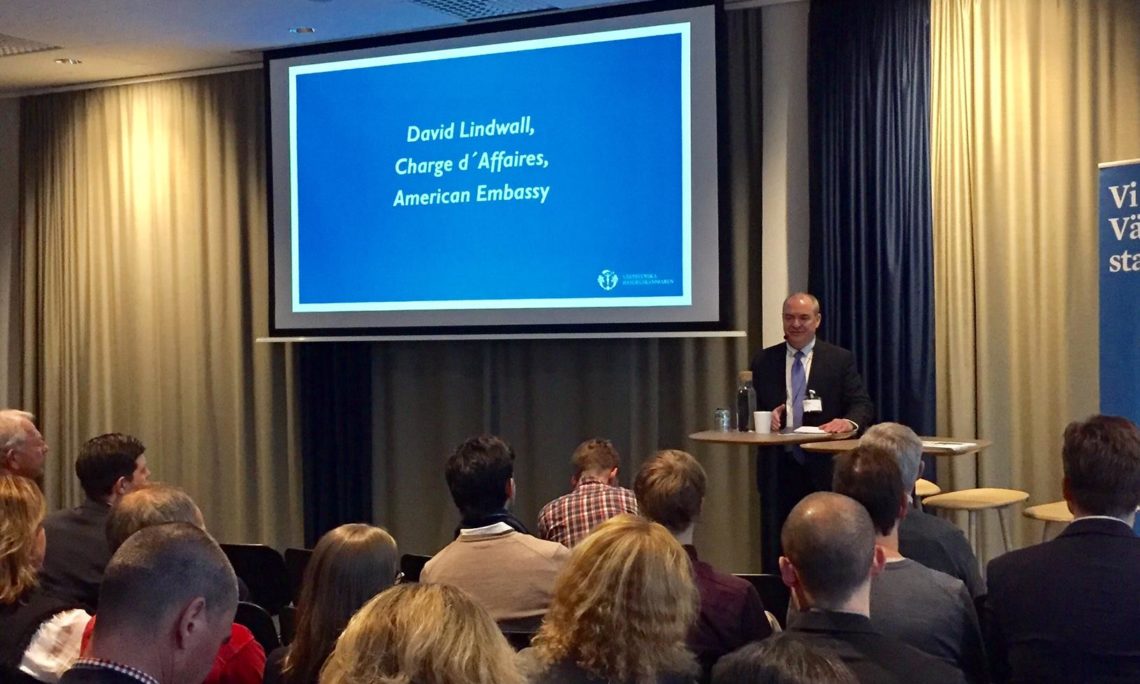 Chargé d’Affaires David E. Lindwall: Thank you to the West Sweden Chamber of Commerce for the invitation to speak to you here today.  I arrived in Stockholm less than six months ago and this is my first chance to visit Western Sweden.

I am especially glad to have the chance to visit Gothenburg, which has a special relationship with the United States.  As you know, it was the port from which so many Swedes sailed to the United States in the last century.  Among those emigrants were my own great grandparents, who departed from Gothenburg more than 120 years ago to begin a new life on the plains of Kansas.

The economic relationship between Sweden and the United States today is a substantial one, and it is critical to both of our countries.  The United States is Sweden’s fourth largest export market, and, in turn, Sweden imports roughly $4 billion worth of goods from the United States every year.  And Sweden is the tenth largest investor in the United States with over $50 billion in cumulative investment creating between 200,000 and 300,000 jobs in the U.S.

Swedish companies have a presence in all 50 states, and West Sweden companies are major contributors to this success.   Look at Volvo Cars’ construction of a new plant in South Carolina; SFK’s Solutions Factories in Texas and Ohio; and Cellmark, with their versatile portfolio and offices spread out across the United States.  At the same time, the United States is the fifth largest investor in Sweden, accounting for roughly 73,000 jobs.

I am frequently asked in Stockholm how the economic relationship between Sweden and the United States is likely to evolve under our new Administration.  Many of you heard President Trump’s address to Congress on Tuesday night, in which he outlined his vision for boosting economic growth during his presidency.  Since his election, investor sentiment in the United States and the stock market have responded positively to his proposals for regulatory and tax reform, increased infrastructure spending and addressing the budget deficit.  In addition, President Trump has brought accomplished private sector leaders into his Cabinet to focus the policies of the administration on generating economic growth.

There has been much speculation about the new Administration’s commitment to trade, with some questioning whether the United States was moving towards isolationism.  President Trump and his team have made it clear that trade is key to sustaining economic growth and creating jobs.  In his testimony before the Senate, Secretary of Commerce-designate Wilbur Ross said that the United States has no intention of diminishing our exposure to world markets—but for trade to benefit all, it must be fair as well as free.  This commitment to free, fair trade was reinforced by the President in his address to Congress two days ago, as well as in the trade policy the administration submitted to Congress yesterday.  Ensuring that principles of fair trade are adhered to by all global trade partners benefits both American and Swedish businesses and workers.

President Trump has said that he wants to make doing business in the United States easier so that producers will feel welcome.  He has laid out plans for streamlining the regulatory framework and revising tax policies.  Sweden’s innovative private sector and its strong tech sector already give Sweden a significant competitive advantage in the U.S. market, and Swedish companies operating in the United States will benefit directly from the President’s policies.

Some Swedish innovators already have a presence in the United States but are looking to expand.  Others may export globally but are considering a first-time investment in the U.S. market.  Some smaller businesses may have a great product but aren’t sure how to break into the large and diverse American market.

For those of you who may be considering investing or expanding your investment in the United States, I hope you will take advantage of SelectUSA, the U.S. government program to promote and facilitate investment.  It’s a one-stop-shop that can help save time and money by guiding you to the right information and resources, and helping you navigate regulations and other considerations at the federal level.  SelectUSA will hold a three-day conference in Washington D.C. in June that has something for everybody—from start-ups planning to break into the American market to large companies that already have a strong presence in the United States.  You will hear more about this program and the summit a little later today from the Embassy’s Commercial Section.  They stand ready to assist you and to answer your questions.

In closing, I would like to restate that the vibrant economic relationship between Sweden and the United States benefits both of our countries and will continue to grow under the Trump administration.  During his February 20 visit to Brussels, Vice President Mike Pence expressed the strong commitment of the United States to continued cooperation and partnership with the European Union to maintain and promote free, fair and flourishing economies.  He highlighted the fact that transatlantic commerce supports more than 14 million jobs on both continents and improves the lives and well-being of all of our citizens.

Whenever there is a change of administration in the United States, legitimate questions arise over how relationships and policies will change.  But in the words of Vice President Pence:  “The United States commitment to the European Union is steadfast and enduring.  We are separated by an ocean, but we are joined by a common heritage and by a common commitment to freedom, to democracy, and to the rule of law.  And we’re confident that that bond will endure and grow in the years ahead as we meet our future together.”

And I’m equally confident that the U.S. / Swedish relationship will endure and grow as well.