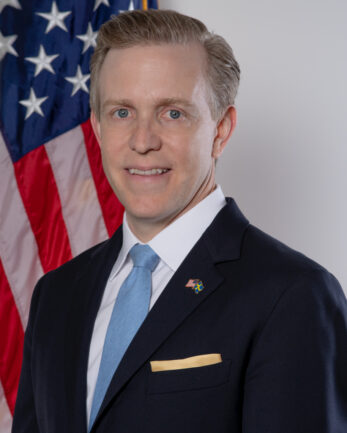 U.S. Ambassador to the Kingdom of Sweden

Ambassador Howery spent almost twenty years as a highly accomplished venture capitalist and entrepreneur specializing in creating and funding technology companies.  He is a co-founder of and former partner at Founders Fund, a San Francisco-based venture capital firm, which has over $3 billion under management.  Prior to Founders Fund, Ambassador Howery co-founded PayPal where he served as the company’s first Chief Financial Officer, helped raise over $200 million in private financing, and assisted in the company’s $1.5 billion sale to eBay.

Ambassador Howery is a founding advisor to Kiva.org, a non-profit group that helps develop the next generation of global entrepreneurs, and he has been an active supporter of the performing and visual arts.  He has served as a director for numerous companies, including ZocDoc, Inc. and Careportal, Inc., both in New York, and Quantcast Corporation, in San Francisco.  He was selected to keynote the Harvard Business School Entrepreneurship Conference in 2008.

Ambassador Howery received his B.A. in Economics from Stanford University in 1998.  He has been recognized by the Forbes Midas List of the 100 top venture capitalists for 2015 to 2017 and has been acknowledged by the World Economic Forum as a Young Global Leader from 2012 to 2017.  He is an Eagle Scout and has served on the board of The Explorers Club.