This summer, the U.S. Embassy presented a public outdoor exhibition about a forgotten but important World War II-era U.S. information agency, the Office of War Information (OWI), that had its Stockholm outpost in Villa Åkerlund, the U.S. Ambassador’s Residence.  The exhibition was displayed along the pathway in front of the OWI’s former office in Nobelparken, Djurgårdsbrunnsviken.  On display between June 22 and July 27, 2021, the exhibition is now available digitally, with additional material. 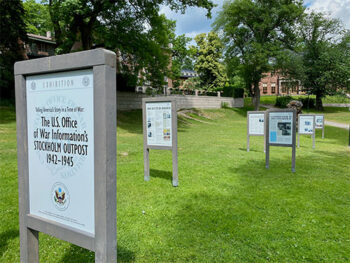 The principal goal of the OWI Stockholm outpost, which counted at its peak more than a dozen Americans and almost three dozen full and part-time non-U.S. staff, was to encourage Sweden to support the United States and the Allied war effort in the face of a concerted campaign by the Nazis to convince Swedes to take a different stand.  During its three-year existence, the Stockholm outpost was run by a young Danish-American, Karl Jensen, who had previously served as a personal secretary to the celebrated U.S. architect Frank Lloyd Wright.  OWI Stockholm worked closely with the Swedish press to which it distributed thousands of news feature materials, editorials, and photographs about the United States.  It also supplied magazines and films, including a short film entitled Swedes in America, starring Ingrid Bergman.  OWI Stockholm co-sponsored the first architectural exhibit held at the National Museum:  “Amerika bygger” (“America Builds”).  The outpost also took advantage of its location to smuggle publications and information about the United States and the Allies into occupied Denmark and Norway.  The OWI Stockholm offices were located in Villa Åkerlund (which is today the U.S. Ambassador’s Residence) in Nobelparken.