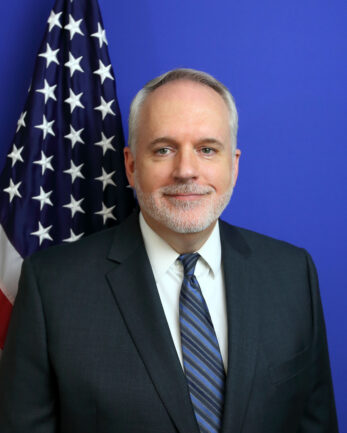 Mark Evans became Deputy Chief of Mission at the U.S. Embassy in Stockholm in August 2022.  Prior to that, he served as Director of the Afghanistan Desk in the State Department’s Bureau of South and Central Asian Affairs from October 2020, including almost one year as Acting Deputy Assistant Secretary for Afghanistan.  Previously he was Deputy Political Counselor in Baghdad, Iraq from 2019-2020, following previous Iraq-focused assignments as Political External Unit Chief in Baghdad from 2011-2012 and two years as Deputy Director of the State Department’s Iraq Desk from 2012-2014.  In between those assignments, he served as Political/Economic Counselor and Acting DCM in Stockholm, Sweden from 2015-2018.

Mark also served two tours in Beijing, China, covering consular, political-military and nonproliferation issues, and worked on crisis management issues in both the State Department’s Operations Center and as a crisis management trainer at the State Department Foreign Service Institute.  Mark’s other assignments include service as the Finland/Estonia Desk Officer, and in the U.S. embassies in Tokyo, Japan, and Oslo, Norway.  Before becoming a diplomat, Mark worked for six years in the U.S. House of Representatives in leadership offices and as Legislative Director for a Representative from Wisconsin.

Mark holds a Bachelor’s degree in Political Science from the University of Utah and a Master’s degree in International Affairs from The George Washington University.  He is married to Kristen Evans and has four sons.

The Embassy is closed on U.S. and Swedish Holidays.