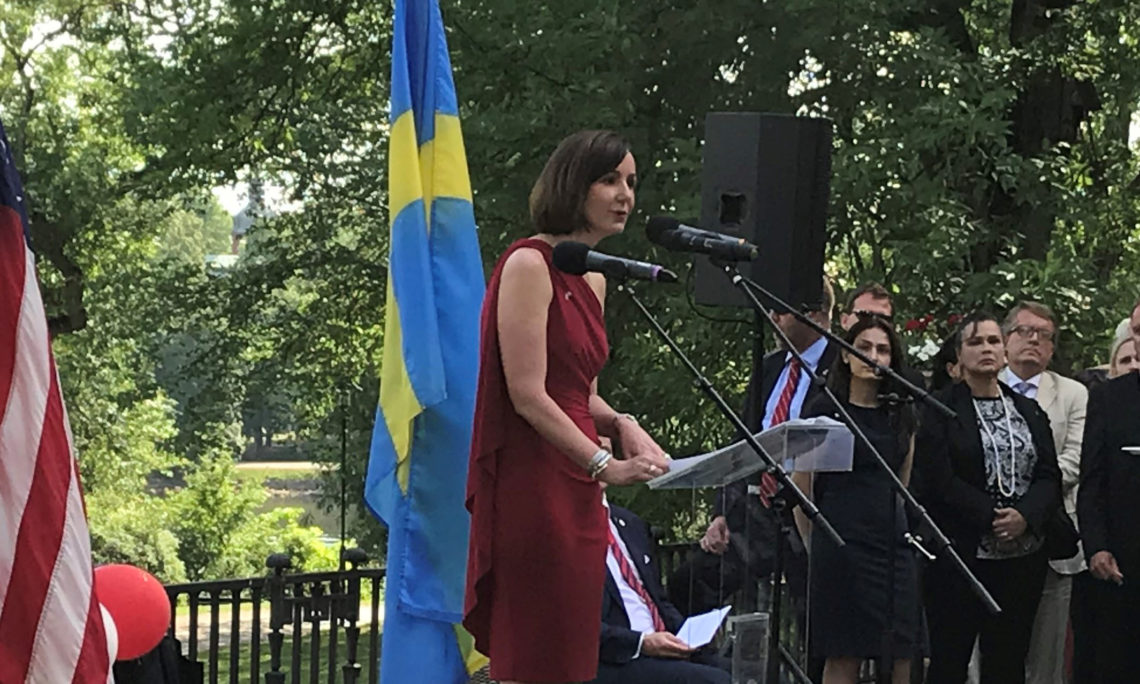 Good afternoon and welcome to our 2019 Independence Day celebration in Stockholm!

We are very pleased that so many of our friends could join us here today. I would especially like to thank Speaker of the Parliament Dr. Andreas Norlén for joining us to commemorate the 243rd birthday of the United States of America. It is a great honor and privilege to have you with us.

I would also like to thank our very generous sponsors once again, who made this event possible.

As you probably noticed, not only are we celebrating 243 years of independence, but we are also commemorating the 50th anniversary of the Apollo 11 moon landing. In deference to Swedish punctuality, we are a bit early: our Independence Day is on July 4 and the Moon landing was on July 20, but I sincerely hope most of you will be enjoying a holiday then!

It was in 1961 that President Kennedy issued his bold challenge to the United States and the world: that our country would land a man on the Moon and return him safely to the Earth by the end of the 1960’s. There were more than a few doubters, but in 1962 President Kennedy reiterated the goal in a famous speech:

He said, “We choose to go to the Moon in this decade and do the other things, not because they are easy, but because they are hard. Because that goal will serve to organize and measure the best of our energies and skills, because that challenge is one that we are willing to accept, one we are unwilling to postpone, and one we intend to win, and the others, too.”

The achievement came at a cost. Four astronauts lost their lives preparing for the Apollo missions. The monetary cost of the program totaled roughly $200 billion in today’s money. But as a result, 12 U.S. astronauts have walked on the surface of the Moon so far. They conducted experiments, gathered samples of the lunar surface, drove vehicles, and even hit golf balls.

In one famous experiment in 1971, as part of the Apollo 15 mission, astronaut David Scott reenacted the famous hammer/feather drop, proving Galileo’s centuries old hypothesis that in a perfect vacuum all objects fall at the same rate.

The Moon landing also had enormous ripple effects in technology, materials development, and engineering. It has led to the development of many unforeseen commercial applications.

It is this aspect of the Apollo program and the bold declaration of President Kennedy that has had enormous benefits over the past 50 years, not just for the United States, but also for the world.

While the Apollo program is often seen as a demonstration of American bravery, ingenuity and determination, it is also a symbol of cooperation. Its success required the efforts of nearly 400,000 people, certainly not all of whom were American. In fact, one of NASA’s partners was a Swedish company, Hasselblad, makers of high quality photography equipment to this day. The still images that we have from the Moon, some of which you’ll see on our screens today, were taken by the astronauts using Hasselblad cameras.

In addition to photos, astronauts brought back a total of 382 kg of moon surface samples, which are still being studied today. In fact, Presidents Nixon and Ford gifted more than 130 countries, including Sweden, moon samples as a goodwill gesture to promote peace and harmony. President Ford’s moon dust gift from Apollo 17, is on display at the Swedish Tekniska Museet.

Space cooperation continues between NASA and the Swedish National Space Agency on satellites, information, and technology sharing. Our two countries are engines for innovation and technology both here on Earth and in the heavens. And space cooperation is but one of the many areas in which we leverage this shared talent for the betterment of the United States, Sweden, and the world.

Mr. Speaker, ladies and gentlemen, the Apollo 11 Moon landing reminds us that, although the challenges facing the world may at times seem insurmountable, humans have the capacity to overcome them – with the right combination of imagination, hard work, and excellent partners.

The United States and Sweden have the courage, ingenuity, and determination to confront world poverty, disease, terrorism, organized crime, discrimination, and of course security threats, including, perhaps especially, Kremlin attempts to weaken the credibility of America’s commitment to Europe.

Mr. Speaker, it is an honor and a pleasure to be working with Sweden on these critical issues. Thank you again for joining us today.

Ladies and gentlemen, please welcome to the podium, Speaker of the Parliament, Dr. Andreas Norlén.