Home Home | Our Relationship | Ambassador Kenneth A. Howery | Russia and China are posing risks in the Arctic (Op-ed published in Svenska Dagbladet 2020-02-20) 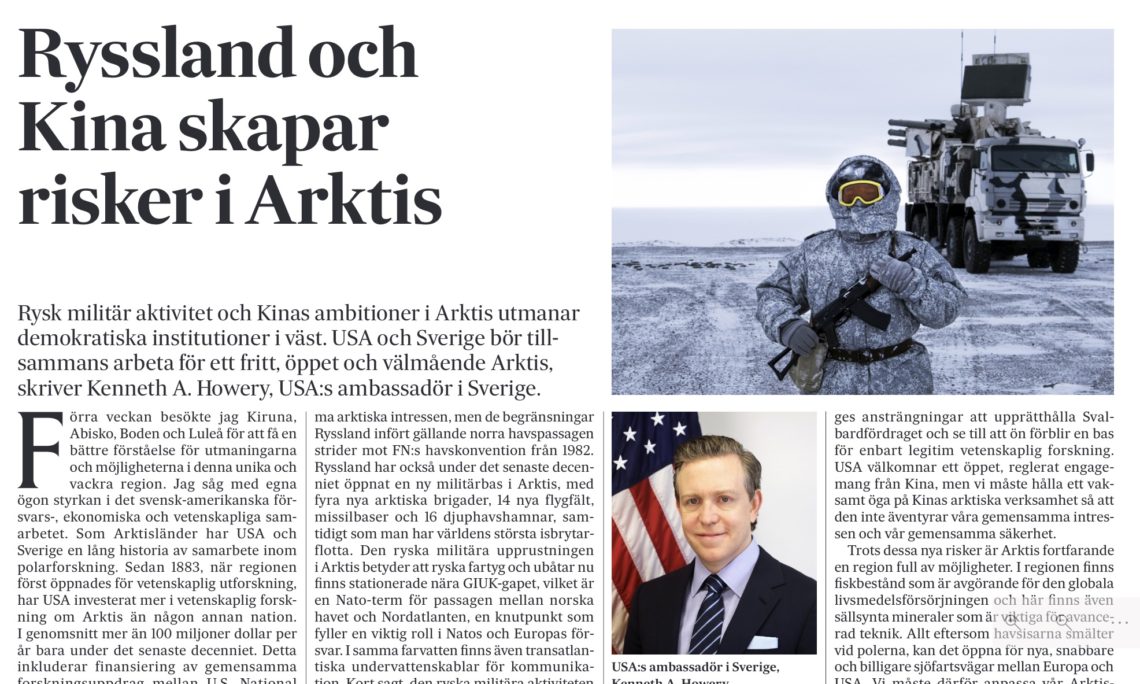 Last week I traveled to Kiruna, Abisko, Boden, and Luleå to better understand the challenges and opportunities in that unique and beautiful region.  I saw firsthand the enduring strength of U.S.-Swedish defense, economic, and scientific cooperation.  As fellow Arctic states, the United States and Sweden have a long history of cooperation on polar research.  Since 1883, when the first International Polar Year opened the region to scientific exploration, the United States has invested more in Arctic scientific research than any other nation, averaging more than $100 million per year over the last decade.  This money includes funding for joint missions between the U.S. National Science Foundation and the Swedish Polar Research Secretariat undertaken with Sweden’s most powerful icebreaker, the Oden.

U.S. Arctic policy has also fostered strong diplomatic ties with Arctic countries.  In 1996 the eight countries with territory above the Arctic Circle – Canada, Denmark, Finland, Iceland, Norway, Russia, Sweden, and the United States – formed the Arctic Council as the premier multilateral forum for regional governance together with indigenous peoples of the North, including the Sami, whose representatives I met in Kiruna.

Despite our successful collaboration in the Arctic, the United States sees new risks in the region driven by the desire of Russia and the People’s Republic of China (PRC) to challenge democratic institutions in the West.  The diminished sea ice and declining snow cover create greater opportunities for Russia and China to pursue Arctic agendas that clash with the shared ideals of liberal democracies and threaten our collective efforts to ensure the Arctic remains a region of rules-based governance, innovation, scientific collaboration, and low tension.

Russia is the largest Arctic State, with over 53 percent of the Arctic Ocean coastline.  Moscow has legitimate Arctic interests, but its restrictions on the freedom of navigation in the Northern Sea Route are inconsistent with the 1982 United Nations Convention on the Law of the Sea.  Over the past decade, Russia has also unveiled a new Arctic command, four new Arctic brigades, 14 new operational airfields, new deployment of missile systems, and 16 deep-water ports, while maintaining the largest icebreaker fleet in the world.  The Russian military buildup in the Arctic provides Russian ships and submarines with easy access to a critical naval choke point, the Greenland-Iceland-UK Gap, that plays an outsized role in NATO’s and Europe’s defense.  Underwater transatlantic communication cables cross those same waters.  In short, Russian military activity in the Arctic is a risk that we need to address.

The People’s Republic of China presents a different risk.  Its stated interests are access to natural resources and Arctic sea routes.  In 2018, the PRC declared itself a “near-Arctic State” in an attempt to legitimize a formal role for the PRC in Arctic governance and development.  However, there are only Arctic States and Non-Arctic States.  No third category exists and claiming otherwise entitles China to no such formal role.  It is seeking to grow its economic, diplomatic, and scientific presence in the region.  It has secured mining licenses throughout the Arctic, including for uranium and other rare-earth minerals, sought to acquire deep water ports in Sweden and elsewhere, launched its first home-built icebreaker, and begun work on a new (potentially nuclear-powered) icebreaker.  While this behavior appears benign, the PRC has demonstrated a willingness to use coercion and threats to get what it wants.  The recent experience in which a PRC Ambassador threatened to cancel a trade agreement if the Faroese government did not sign a 5G contract with Huawei is one example.  The PRC has also undermined Norway’s efforts to protect the integrity of the Svalbard Treaty and ensure the island remains a base for only legitimate scientific research.  The United States welcomes transparent, rules-based engagement by China, but we must examine the PRC’s Arctic activities closely to ensure that our interests and security will not be jeopardized.

Despite these emerging risks, the Arctic is still full of opportunity.  It is home to fish stocks critical to the global food supply and deposits of rare earth and other minerals essential to advanced technology.  As the poles warm, new, faster, and cheaper circumpolar shipping routes may emerge.  We must therefore adapt our Arctic approaches to ensure the region remains open to shared economic, scientific, and security interests.

As we adapt to these new opportunities and risks, the United States’ goal is to be the Arctic partner of choice.  We are reopening a U.S. Consulate in Nuuk, Greenland this summer, and proposing a $12.1 million funding package to help local communities there resist the lure of Chinese investments; investments which come not just with strings attached, but with handcuffs.  We also support people-to-people exchanges through our Fulbright Arctic Initiative and programs to promote sustainable economic development.  As I noted at Luleå Technical University, we hope Swedish Arctic entrepreneurs will find joint business opportunities with us.  Finally, we remain committed to continued strong cooperation with the Arctic Council – a body that has directly contributed to the region’s long history of peace and stability.

After visiting the region, I am more confident than ever that together the United States and Sweden will be able to fully mitigate the risks and create a free, open, and prosperous Arctic that will benefit our two nations, and the world, for years to come.